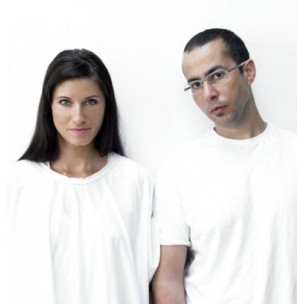 Designer: Dan Yeffet
born in 1971 in Jerusalem (Israel). studied at Bezalel Academy: School of Art and Design in Jerusalem (1999-2001) at 2001 he moved to the Netherlands where he graduated in the Gerrit Rietveld in Amsterdam in 2002 (BA in industrial/product design). After graduating he formed his studio and a collaboration platform in Amsterdam. In 2005 the studio moved to Paris until this present day.

He designs furniture pieces, glass sculptures and lights, objects of desire - chic and pure - daily products, conceptual space, urban spaces, gallery objects and limited series. His work can be described as innovative, simple and yet with a strong identity.

between 2010 to 2012 Dan has collaborated with the Czech designer Lucie Koldova on various projects.
Lucie Koldova is a Czech product designer, who graduated from the Prague Academy of Arts in the studio of Jan Nemecek and Michal Fronek , completed an internship in Gothenburg, Sweden , and then worked in the studio of world-famous Israeli designer Arik Levy. Since 2010 collaborates with other Israeli Yeffetem Dan , a graduate of the Bezalel Academy in Jerusalem and founder of the study JellyLab .

Muffin lamps convey a truly extraordinary lighting experience. Their puffy, round shapes and combination of traditional hand-blown tinted glass, oak, and gentle light fill any space with a special aura. The singular design and exceptional quality of the Muffin lamps caught the attention of Yves Saint-Laurent, which used them in a TV advertisement for its 2011 men’s collection. The Muffin collection comprises three basic variants – floor, ceiling, and table – that can be fitted with a wooden lamp body as well as different glass shades in subtle tones of grey, brown, and yellow.

The craftsmanship applied in production follows in the centuries-old tradition and experience ofmaster glassmakers. The precision crafting of hand-blown glass instills distinctive, enduringcharacter and outstanding quality in all Brokis products. The glass shades are formed from multiplelayers of molten glass, each of which is scrutinized by the master glassmaker prior to being blowninto the mold. Up to 70% of the resulting quality is achieved in this stage of production. No lessattention to detail is paid in handcrafting the wooden elements of the light. Each piece is individuallyprocessed by the artisan in a series of strictly observed production stages. We take special care inselecting quality fine wood and ecologically friendly materials to treat it with.