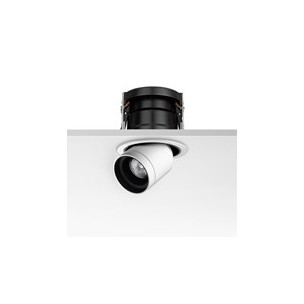 Family of indoor spotlights for accent lighting. The great variety of possible light sources, even the latest generation of LED, combined with the availability of a wide range of accessories, makes this family of products particularly suitable for any type of application, from commercial premises and offices to typical residential environments or highly professional facilities such as museum exhibitions. With different beam angles, they enable us to meet the needs of any lighting requirement.

Knud Holscher is a Danish architect and industrial designer of international renown. For many years he was a partner in KHR Architects with Svend Axelsson and designed many of their works together.

Holscher studied with Erik Christian Sørensen and professor Arne Jacobsen at the Royal Danish Academy of Fine Arts School of Architecture, graduating in 1957. He joined the office of Arne Jacobsen in 1960 and moved to England to oversee construction of Jacobsen's St Catherine's College, Oxford in 1962. Holscher was awarded the British Design Award in 1965 and 1966 for work done in collaboration with Alan Tye before accepting a partnership in established Danish architectural office Krohn and Hartvig Rasmussen,later renamed KHRAS Knud Holscher retired from KHRAS in 1995 and has since headed his own office Knud Holscher Design.

Though starting out as an architect, it is his work as industrial designer which has brought Knud Holscher international attention and recognition. His designs have been linked to the Hochschule für Gestaltung Ulm and to the work of HfG Ulm student Dieter Rams In 2003, he said of his work: "Design should be like buttons on a shirt. With character to catch your attention, but no more so than you can use it without thinking about it"

Holscher was professor of architecture at the Royal Danish Academy of Fine Arts from 1968–1988 and professor of design from 1994. He has received numerous awards for his work and is an Honorary RDI, Royal Designer for Industry since 2004.